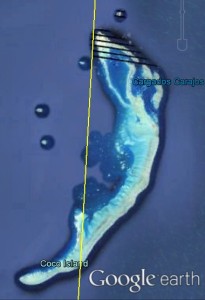 Hitting islands is an easy and entirely too common way to ruin your race. The best SOLers do it once in a while. And of course there was the much talked about Vestas grounding. So how do we avoid this?

First off, no, Team Vestas were not taking any ‘risks’. To hit a fairly wide reef right in the middle, they had to be blissfully unaware of the obstacle.

A major question was how software should have prevented the grounding. In my opinion, not at all. In this kind of situation one should do a clean route without obstructions, it’s the navigators job to identify any obstacles.

The first reason is that projected routes aren’t super accurate. If the calculated ‘optimum’ route intersects an island 12h out, that means exactly nothing. 6h is accurate in SOL, no so much IRL. In Punta-Fort Lauderdale I tracked the possible spots for crossing the Antilles (around 13N 61W), over a couple days the different ‘optimum’ routes had covered nearly a 100nm range! And this in a race with no corrections at the wx whatsoever. Software routing around islands introduces a lot of noise, nothing more.

Second, I would not trust software at all. You might get a route that avoids the land polygons, but what about wind shadow, shallows, waves, cardinal marks etc? Would software allow the pictured route? I don’t want to find out.

Third software routers are in fact poorly equipped for the best track around islands. Every router in existence is grid based, islands never lie exactly on the grid. I suppose one could create a perfect maze router, but for good reason nobody cares to do it.

Finally it’s rather trivial to steer around an island a couple hours away, so long as you know it’s there…

Now it’s obvious that the human navigator must follow a protocol to spot islands in time. We don’t know why the protocol broke down for Vestas, the main assumption being zoom-level weirdness, but it’s all speculation for now. Let’s look at the much less strict SOL protocol instead:

Inspect the start, finish and waypoints at a high zoom level.
Generally be aware where the islands are.
At the wx, look for any obstacles near your predictor line.

Whew, it’s not that hard. Thankfully the GSHHG charts that SOL uses don’t have any big surprises at higher zoom levels.

The trick for getting a clean route in BWR is to put the start point on land, I sometimes go out of my way to do this.

If the optimum route cuts across land, or inside a WP, this means one has to get as close to the coast as possible. OTOH the fastest route might be clear anyway, but it would not be obvious when routing with boundaries.

The computing time scales with the weather area. This means that SOL grib + BWR is a bad idea, moreso if land boundaries are ignored. One needs to use either a custom sized 3rd party grib (like zygrib) or trim the SOL gribs in BWR. I do both.

3 thoughts on “Thoughts on how to not hit islands”