Let’s tackle the big one, VMC. To be blunt, the big difference between the top SOLers and the fleet is simply sailing faster. Here I will explore how.

But first some definitions, this is how they are used in SOL, sadly these aren’t really universal…

VMG
Velocity Made Good. This is the speed relative to the wind. Boatspeed * cos(TWA). A great benchmark for boat / crew, and the most important factor for windward – leeward. In ocean racing it’s only the slowest possible speed.

VMC (traditional)
Velocity Made Course. The first derivate of DTF. Boatspeed * cos(COG-bearing to WP). I don’t care about this one ever, however it’s displayed in many places.

VMC (generic)
VMC towards an arbitrary target. Boatspeed * cos(COG-bearing). This is the one I want. I’m going to write this as VMC270 = “course that gets me West as fast as possible”. 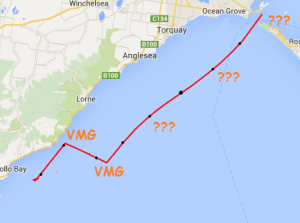 Let’s look at the Melbourne to not quite Portland race. TWD starts at 265 and goes up to 285. In the final 2.5h before the halfway mark, the wind settles at TWD 258. In this time I do a couple tacks and generally run at max VMG. But this won’t help in the first 5 hours. Now I could just describe the VMG part as VMC258. What if I held VMC258 in the hour before the wind settles? Or the hour before? Or all the way from the start? Aha! 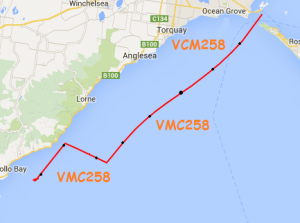 And this, my friends, is the whole secret. Rather than slogging hard upwind, I can speed out of the gate and gain the best position vs the future wind. In fact a constant VMC target is a great approach in most cases. There are some limitations that will be covered later… But first some practical considerations. 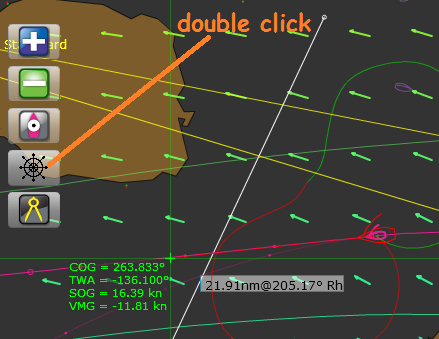 The Optimum Angles Tool is the most convenient way to compute the best course. Under ‘VMC target’, select ‘Bearing’ and enter your target. Then hit ‘VMC’. This gives two possible courses, use the fast one. Or you could just steer using the polar butterfly (pictured). I’m sailing VMC295, the ‘advantage line’ (295-90=205) is approached at maximum speed.

Tacks / gybes happen at max VMG. This means if you know when to tack, you have your VMC target. Not the other way around, and beware that targets do change over time, and of course you must adjust at the wx updates anyway. Without tacking, estimating the best target gets a bit trickier.

You need to change course A LOT. As a rule of thumb, a 2 degree change in TWD means a 1 degree change in both TWA and COG. This is more accurate close to max VMG, by contrast in Cowes – St. Malo a 105 degree shift meant 30 degree COG, 75 degree TWA… 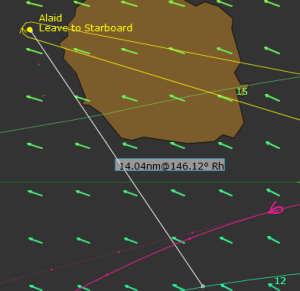 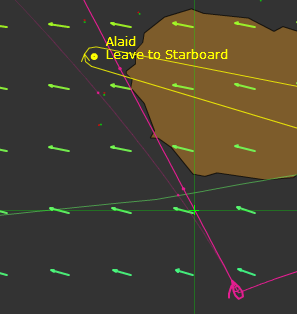 Keep the WP halfway between the predictor lines. Setting up a TWA predictor on your real boat is left as an exercise to the reader