WOW! this was one of the best sailing I ever done in SOL.

And this thanks to the challenging and changing wx along the route and to all the person that enter in this crazy long leg with a boat.
And of course to the hard fight with Lolla, to nominate the biggest opponent.
Lolla sailed a superb legs, applying the sailing strategic manual to the letter, and giving me only one risky chance that turned well at the end.
So as I pick up him as my reference opponent I will mention him more than others.

The difference was made by the weather evolution, with the cyclone in the middle that influenced all the decisions before and after its passage.

I don’t pretend to make a complete analysis as there are excellent meteorologist in SOL, far better than me.

As this was the last race valid for the Ocean championship a lot of boats, the “Big boats“ were sailing to cover each other.
That gave the rest of us free space to explore — more opportunity to the fleet.

Everyone was looking at the forecast for the west section of the Indian Ocean and southern Arabian Sea and planning where to cross the equator.
Given the almost stable wind near the Arabian peninsula, two big ideas were possible — as explained in the outlaw´s entry on the 3rd december in this blog.

1- an approach from E going almost to India, looked preferred to me with the big question mark: how far E?
2-follow a straight N course to reduce the distance (almost what the IRL boats did)
It turned out to be a mix of course…

Router helped me a lot to evaluate the different options from one point to another in some minutes instead of doing hours of hand calculation.
The challenge was really to pick up the good point to tell the software where I wanted to go, and from where I was coming.
Just used the software like a enhanced divider.
I never let the router select where to go.
(you can easily find a SLI in that way….)

The Leg was divided in 3 phases, each of them requiring a different approach:

Start to Mauritius
Mauritius to Oman
Gulf of Oman 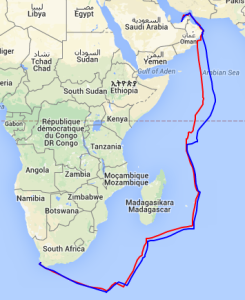 Start to Mauritius-classic with surprise

Almost classic start where all the big guys scramble South without taking care too much about the rumbline.

I was personally not so much convinced of the situation as it looked too unstable to me just south of equator to guarantee a great lift to justify the extra distance .
So my strategy there was to be north of the Big´s pack, and to have an exit strategy toward Mauritius if things turned out as I was expecting. 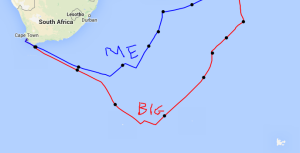 Lolla, in red and me in blue, was (one of?) the first that break away and point to Mauritius direcly.
Lolla had a couple of miles advantage as I delayed my turn to N.
Deadly error for me as he sailed in better pressure and angle all the way to Mauritius. 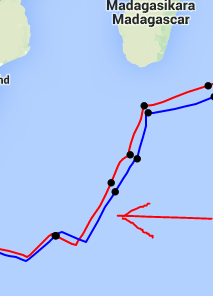 At that time the storm was building, and the game developped in to be at the mark to cross the storm in time and beeing launched in the direction you want after it.
Midway almost half of the fleet was cutted away by a pression ridge that form a nice wall , for the one that already passed it.

At this point Lolla had 20 miles on me.

At this point the pack of the forerunner was reduced to about 20 boats leaded by Lolla.
basically 3 route to cross the wall on the doldrum were possible
1-going W to catch the strong steady wind from NE sooner but having later 2000 nm beating….
2-direct route toward N, blocked at that time we were at Mauritius by a giant pressure ridge
3- going E-NE using the fading of the storm and the countervortex from the Monsun to cross the doldrum in some position offshore of the Maldive to have the better angle toward the gulf of Oman.

So for me was clear the option 3 was the only doable, so I pointed NE
As I writing without the feedback of Lolla I can only guess what he was doing…as I have done during the race.
Lolla decided for a very scenic variant going to visit the Seychelles.
Site sighting is always my preferred option on SOL when possible.
As side effect the separation between me and Lolla increase up to about 200NM in NORTH direction… At that time I was really wondering where Lolla was going as it was clear (for me) that the only route doable was at E (number 3)
Finally Lolla gybes and start to cover me.. with a distance of 200NM, He was following the wall that was blocking us, in red, and I was pointing my target.

And to my disappointment and surprise two things happen.
First,the north route was open again straight to the finish and I was 150 miles S of Lolla.
As to follow him was not giving me any chance to pass , I kept going NE.
The routing software was not agreeing with that but any router is able to play strategy and see over 7 days… so I simply disregarded it.
Second surprise was that Lolla was still cover me till he had little wind available and basically we approach the countervortex (in green in the picture) in the middle of the Arabian sea generated by the monsun on the opposite side. Lolla in red and me in blue. 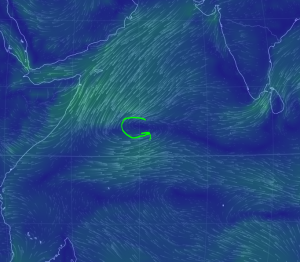 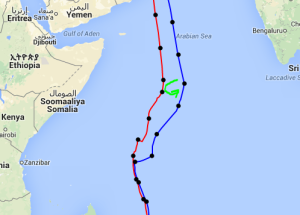 This allow me to recover almost all the “latitude ” gap I had at that time.
The forecast who will be first at Oman´s straight were 50/50
The little shift(s) during the next 5 days give me and advantage of 2 hours at the end of this part that were fundamental for the final result.

Gulf of Oman – the Big Gamble

two option were possible, crossing in the middle or chasing the South coast slowly… 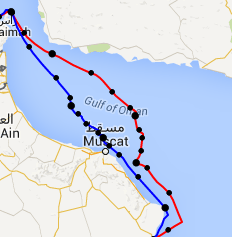 I was going for the first one when again the WX change, pushing me toward the coast and the S option was slighty advantaged (me in blue)
as the wind was vanishing going E having 2 hours advantage was imply that I could not cover if some of the first 20 boat decide to gamble and take the North route.
So I committed myself to follow the coast. All the chasers follow me, I was lucky again.
The first one to take the North chance was Jepsom, when I was already midway near Muscat in the bigger hole I have seen.
I do not imagine what could have turn out if someone would have done it 36 hours before. Just to give a try without guarantee.

as the Gulf of Oman was a huge parking place, or swimm party due to the slow speed, a lot of boats complete the recovery taking indeed the North route…
My fortune was that when the breeze built up again I had some miles to administrate and the build up was uniform across the gulf.

This was a leg played most at tattic and strategy level understanding the WX pattern and the position with the other boats.
Happy to not have tidal current yet, or we would have been all packed near Muscat washing up and down in 6 hours rythmus….

Thanks to my wife that let me play on SOL.

And to all of you that make the SOL´s community really special, see you next year.