I’m sure the more astute followers of ocean races have noticed that leaderboards are a poor way of judging positions in a race. Here I will outline why, how there is no fail-safe method and how I approach the problem vs my competitors.

The obvious best method is to sit on the finish line and score boats as they cross. But it’s the internet age and we’re a tiny bit impatient, so what’s the next best option?

Computing finishing times with a router is sorta interesting. But only sorta, in part because you can’t do it realtime, and in part because it isn’t that precise due to the grid limitations. I’d say it’s useful for major splits, say the east/west options for Capetown-Abu Dabi. But as a competitor that doesn’t matter because my tactical options post split are nil.

DTF is the opposite. It’s fast to compute, and a priori a lower DTF is better, but you’re not making any prediction on time to finish. Greater speed likely trumps greater DTF. More often than not the official leader will be whoever is closest to the rhumb. Oh and SOL’s DTF can be a little glitchy.

Ok. What if I could just take the bearing to another boat to tell who is ahead? Well consider what I call ‘advantage lines’. Maybe there is a better name, you have certainly seen these in America’s Cup coverage and the like. 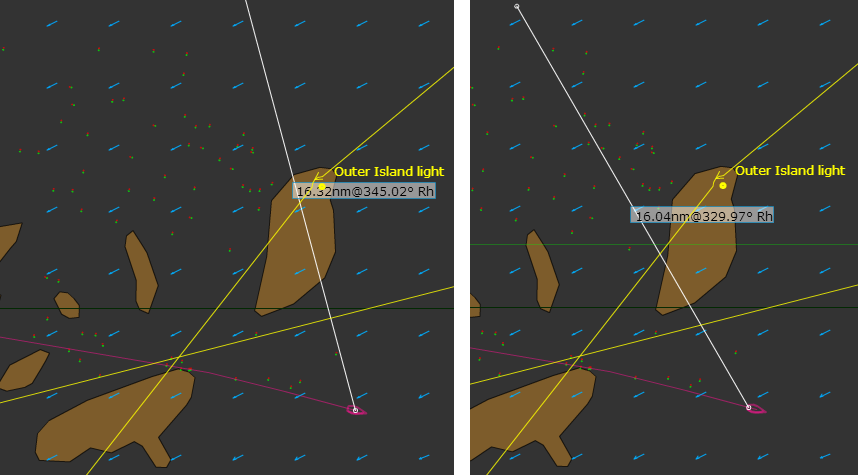 On the left the line is orthogonal to the rhumb, this represents DTF more or less. Scotsman leads with Lou a close second. On the right the line is drawn for the TWD. In other words if Scotsman had to tack now his position is rather bad.

But TWD is only a snapshot, we need something more persistent. That’s right, VMC. Now check out one of hmm’s boatlists. I like these for the accurate bearings.

This tells us a lot. If the true optimum is VMC74 (or more), Scotsman wins. If the optimum is VMC69 (or less) rafa wins. Lou wins for VMC70 – VMC73. If a racer knows their target they can tell how well they are doing. The tactical game relies heavily on these numbers!

In this example DTF represents VMC75, but that is just a number! Bearing to the waypoint never stays the same, and your target may change over time, so the specific scoring is meaningless. TWD is even more changeable. I believe the optimum in this case is around VMC66, for whatever that’s worth.

There are some obvious limitations. Forecasts do change a lot, moving the target 5 degrees at the wx is pretty normal. You can’t really know the optimum VMC until a boundary is reached. Also if boats are far apart, they will have different targets. And for major splits this approach is entirely meaningless. But for your nemesis who is one mile away? Super useful.

And true to the Chrismas Spirit, how should we score boats at the start? 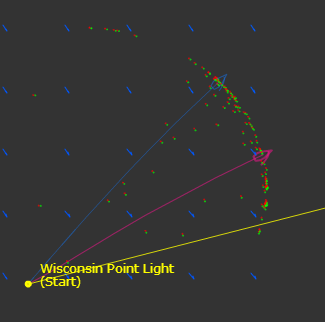 Heh. If they believe in their VMC, then at least for a short while, everyone can think they are ahead