The race was designated a ‘sprint’, but the winds were light and the water almost glassy — just like it was in this photo looking east toward mainland Chile across a cove on the island of Puerto Aguirre.
The light airs forecast in our WRF High Resolution GRIB made for a technical race that put a premium on keeping the boat moving while threading through a myriad of islas.
The length of the race favored skippers in the time zones of the Americas.
The course was simplicity itself.

There was a starting mark in open water in the north.

The finish line lay 20 NMs SSW of the start.

And there were about three dozen islands in between.

Common wisdom is that kind of course can not be solved using routing software.  To the extent that ‘solved’ means generating a list of Delayed Commands (DCs) for input into the SOL client, I agree.
But simply relying on router output without analysis and editing is a recipe for disaster in almost every race.

Chart #2, at right, shows the first and last of my pre-race routings.
The BLUE route starts at Puerto Aguirre N and finds the quickest path to the finish. The route doesn’t care whether it goes over water or land.
The RED adds five ‘helper’ waypoints, selected from the SOL client map, and designed to keep javakeda off the rocks.

The RED route is close to what javakeda actually sailed.  But the router recommendations for even this refined route would have resulted in BBQs had javakeda followed them.
I had to go through two more steps.

The next step was to translate the RED route into DCs and let Kipper’s DC checker map them.  Usually I will simplify the DC set at that point.

Finally, I identified the times when I needed to hand sail the boat.
I mean DCs are great for open water, but if I want to compete with the likes of bonknhoot, Franci, or rumskib, I need to hand sail when approaching and rounding the headlands. 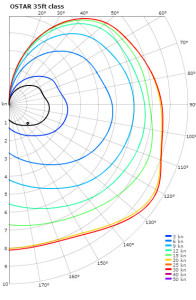 About halfway through the race one skipper [Ironman maybe? I don’t remember] noted in chat that the entire race was a beam reach.

In the light airs we had, the OSTAR35 polar wanted to sail a TWA between 90° and 100°.
As it turned out, javakeda was able to stay within those bounds for almost the entire race.

It’s a simple game … just follow the wind.
Well maybe not quite that simple, but it does speak to the need to understand a boat’s polars — especially any high and low points on that polar diagram.

The top ten all came through the same ‘canal’ that javakeda, bonk, and Franci used.

Most of those in the #11-25 group either headed too far south after transiting the ‘canal’, or recovered from a BBQ.

But beyond #25 were many boats that simply went the wrong way — heading into wind holes and/or following the rhumb line ‘in hopes’.

SOLers thrive on competition.
IMO, It is to our long-term advantage to help other skippers to be competitive as possible.
I’m hoping this post helps.
But I am very much open to suggestions on how to do more.