The third in the 2014 series of SSANZ races in the Hauraki Gulf began as a beat to wind’ard in light airs.  It quickly turned into a match race.

The forecast was for winds backing from  88°T to 84°T during the beat.  That favored sailing the left side of the course.  And that meant tacking along Rangitoto Island.

The wind was forecast to freshen from 6 kts to 7 kts during the beat. That changed the optimum pointing angle from TWA=43.3° to TWA=42.0° at the mark − just one more thing to keep track of.

Rumskib was keeping me company − matching tack for tack.  I looked at that as a mixed blessing.  We would stay close for the rest of the race.
We left Rakino Island to port and split the smaller islands to the NNE. 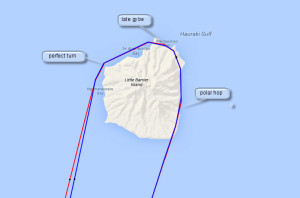 The wind continued to back.  We both kept to the left of the rhumb line on the outbound reach to Little Barrier Island.

After the rounding, and with the race lead, I breathed a sigh of relief and set a course for the next mark.   Meanwhile, rumskib was edging east, above the rhumb line.  Neuroman, Tyger, zero, and rafa followed rumskib.

There were two good reasons to point javakeda east of the rhumb line:

Instead, I remained oblivious to the danger of, as Intermezzo put it in chat, “Snatching defeat from the jaws of victory.” 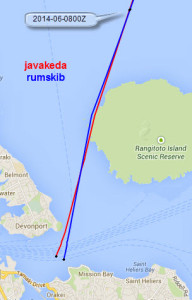 Approaching Rangitoto, this time from the north, rumskib and javakeda were dead even again.  I had a plan to delay heading for North Point and get a better wind angle − really a mini-version of what rumskib had just done to me.

But then rumskib and Neuroman went wide around Rangitoto and rumskib set a course for the center of the finish line.  I learned in chat that rumskib was doing some IRL sailing and had set DCs.  That would cost him any chance of winning the race.