The strategy was decided 5 days ago. Going north to gain as much east as possible and then find a hole to scramble S.

The not extreme north group has better condition on the math side but will face close reach condition and less wind..

The target is still around 18N 176E, hopefully the wx will change again as with the last update was an highway for the boat more south.

But this is the back side of the extreme north route. No exit strategy until the end of the world.

Yesterday the wx close all the door today looks that in  96 hours  a nice gate to the south will open around 20N 175W. 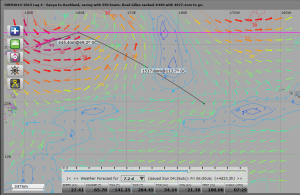 If it persist and we get there is time than will be downwind till to Auckland. The rest of the fleet is so far that is doing another race, after the split on e week ago. With 5000 NM to go bet are still open

The narrow passage (green line) is moving in E direction. I will try to hit the higher screen border like in the first videogame and see if we come out on the bottom side of it. If not, probably,  our route is going S. (well, our…   my at least, how know which secret cards have the people just on my back) Now the game is just get the correct timing to hit the soft spot on the narrow window (if still there in 4 days time) between the two blue bubbles. 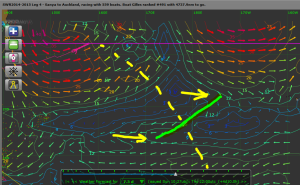 One thought on “No news from the North front”