By now, many SOLers will have heard one or other competitor speak of ‘hopping’ or even ‘hopping the polar’. What are they talking about!? IRL we gybe and tack, but hop, hmmm? Deep Thought (a.k.a. Earth acc. to Slartibartfast) might have come up with it (didn’t) but the answer is ‘sail change’. A ‘hop’ in SOL is an IRL sail change accompanied by a change of course.

If you eyeball a SOL polar (and I prefer to plot them out on a Cartesian grid rather than the polar grid they get their name from) you see a series of pretty curves (isotachs, lines of constant TWS) that sometimes have strange bumps and dips.

Top of the bump your boat will go faster, bottom of the dip slower. IRL, such isotachs are not as fair as SOL’s; this because SOL generates its lines by smoothly interpolating all the (infinitely many) points in between just a handful of points actually used to define the polar, whereas IRL the isotach is actually made up of two or more separate curves (e.g. one with a jib, another with a Code 0, a further one with a gennaker, and perhaps a final one with a symmetrical spi) that intersect at critical points of TWA. Critical because that is the point to definitely change the sail! 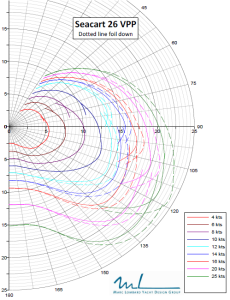 My SOL friend psail recently found a very interesting polar on the web for a SeaCart26 on foils (by Mark Lombard). It’s just a raster but enlarge it and you can read off values. The polar as found on the web and shown adjacent clearly shows the curves for the different sail choices, probably simply gennaker up/gennaker down.

psail and I plan to make a proposal on the SOL forum for a trial race with this machine once we have the data read off, sense-checked and converted to a SOL format. In the meantime, it serves as a good illustrator of how very obvious IRL sail change points become more gradual hopping regions when one combines two isotachs into a single faired smooth curve. Below you see a cartesian re-plot of my initial data capture from Mark Lombard’s diagram and how the originally crisp sail change points become more nebulous on fairing.

As can be seen, fairing makes the performance fall-away ahead of hoisting the gennaker noticeably less pronounced in 25kn TWS, and marginally more pronounced in 16kn TWS. In lower wind strengths the transition is smoothed out almost entirely. So… SOLing, when should you drop or hoist the gennaker and by how much should you alter course with the new sail combination?

Guess what, you can work it out, applying the same basic trigonometric logic that we are familiar with for VMG calculations. In other words, just as when you have to beat upwind or gybe downwind, if the course to your next waypoint sailed in a straight line will have you at a BS that can be improved upon by zig-zagging either side of that course, but in the end, on average, you need/want/must make the waypoint…. then, it follows:

I have set the above in small print for the usual reasons (but if you are interested in the algebra, click on the box and it becomes legible). The important thing is it gives a general formula for the velocity made good if you have to actually arrive at your goal.

Guess what some more: if that goal is directly up- or downwind, the formula simplifies to the one we are more familiar with. Trust me or try it yourself, just put a = b and Va = Vb and simplify.

So, all that you now need to do is to find what combination of angles a and b will give you maximum VMG in that slow straight line direction, according to the formula. I am sure that I am not the only one that already has a spreadsheet that does this by trial-and-error when the goal is up- or downwind. spinacer and wxinspector will give you the up- and downwind angles too, but it is handy (1.) to have tables to hand (2.) of these optimum angles before you hit changing wind strengths if you are sailing by hand (3.).

Making a spreadsheet that trials-and-errors hopping angles is however complicated by the fact that the polar when hopping is not symmetrical either side of the course to the waypoint, like it is when that waypoint is directly to windward or leeward. Also, you don’t actually know before you start what is the worst possible TWA (e.g. 0° or 180º when tacking or gybing) that you are trying to avoid. But hey hoh, I managed it!

Now, finally we come to the topical bit. We’ve plenty of yachts in SOL that don’t hop at all, but we also have a few that hop-a-lot. To-date, the biggest hopper I have come across has been the Gunboat 90. Mostly subtle hops, and often it doesn’t make much of a difference if you sail straight through them, but every now and then knowing them can give you an edge.

I’ve only been SOLing a year and a half, so there could be SOLers already very familiar with the Delphia 47, which we are going to race/cruise(!) from San Sebastian to La Rochelle. It’s a modern cruising yacht, built in Gdansk. Here’s one chugging along in 6kn or 7kn of breeze. 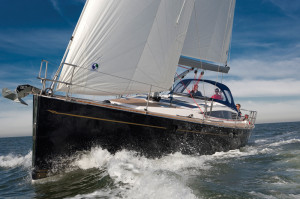 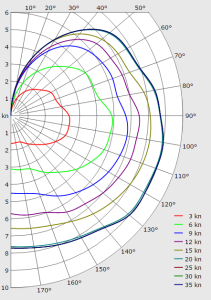 Surprising then to discover it has one very bumpy polar. Now, every dip in a polar is not necessarily a hopping opportunity, and small dips are at best small opportunities, but may be no more than a distraction. So, I set to work.

It turns out that the Delphi 47 has nine (!) distinct hopping ranges, beating the Gunboat 90’s previous record of five, hands (4.) down. So, all hands (5.) on deck for the hop to La Rochelle.

In the chart above, hopping the purple 80° TWA line gives the biggest advantage (c 3% at times), the 160° TWA line slightly less (< 2%) and the yellow 70º TWA line less again (c 1%). The others offer still less advantage but nevertheless exist.

One thought on “Hop to La Rochelle”