Like a game of Association Football, there is more than an element of luck involved in doing well in a virtual ocean race on SOL. And this element of luck is certainly borne out by my results so far in the SWR 14-15: 75, 287, 47, 9, 52 and now p2! 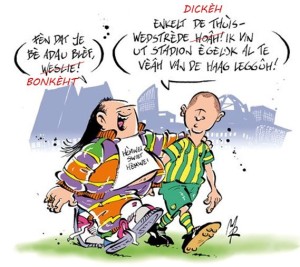 But if you indulge me in the conceit that I know what I am doing, shared by many football managers, for example like my fellow Haagenees who bankrupted Rangers pursuing glory, and is now certain that he will have saved Sunderland if they stay up, I will tell you the tale of how:

We followed the swings of the wind;
A struggle that seemed without end.
To starboard or port?
Well South, but not North!
To our monitors we were all pinned.

Many a wise football manager (aka an oxymoron, by the wise) has taken time to point out that football is a game of two halves. Well snap, again: so was SWR Leg 6. In fact it was even more than that, because after the second half, Leg 6 had extra time and finally a penalty shoot-out.

At Half-Time, having sailed c 1500nm in 7½ days, the leading boats in our virtual SWR fleet had reached a point more or less due East of Recife, and the first major obstacle on our route to Newport was behind us: a shape-shifting ridge of high pressure stretching from (close to!) the coast of Brazil half-way across to Africa.
bonknhoot had basically chosen the same routing as the leaders:

Pesky, uhh hmm and the Ruski,
Who all went to sea from Itaja-i.
But then swerved to the coast,
And were faster than most.
Amen in the name of the Father, the Son and the Ghost.

But bonk had lost six hours on Kenza’s (for it was he) group through various mistakes, and a small squadron that had sailed almost due East for what must have been several days, led by Jepsom, had come bombing in from far out at sea, so that Jepsom and one or two of his flyers were also ahead of bonk.

Nevertheless, bonk was in the Top10 and I need to confess that this was not a complete accident (unlike Sunderland staying up could be, Dickèh). I had been behind my desk every day and would be all the way to Newport, and had resolved to religiously route every 6-hour WX forecast, morning, noon and night.

As you can see, it is in three parts: 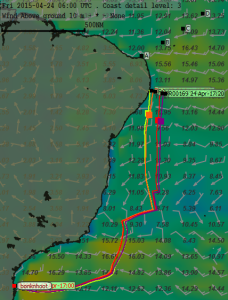 But as Javakeda has pointed out before, the reliability of those additional forecast days becomes exponentially less with every day further into the future. So I didn’t bother and instead placed four intermediate waypoints equidistant to Newport along a curve North East out from Recife and ran a routing to all four. Now I have developed the habit of filing away the old gribs, but alas the 16:30 17/4 download is missing from my files, so adjacent ‘oplettende lezertjes’ instead can find the first routes I ran with the 10:30 WX earlier that day.

All four routes were basically identical, but by the time the grib ran out of wind, there was only a little bit of sailing left to waypoint A, but more than twice as much to get to D. 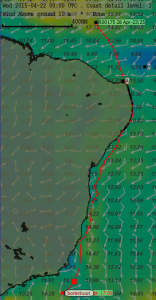 What you cannot see from the routes is that until hitting light weather about 2½ days out, an initial course due North was preferred, which is what many of us opted for, followed by a judicially timed tack East during the night, and early doors bonk, Kenza and kroppyer were battling for every upwind 0.01nm.

So, how did bonk lose 6 hours? Well the devil is in the detail, and at some stage, whilst still dicing with Kenza, the router suggested a second short hitch North and to weather. I should have known better. Sailing at optimum up- or downwind TWAs for short periods of time for position in long range ocean races rarely pays. For obvious reasons. It cost bonk at least an hour.

Despite the very clear results I had got from my initial routings being repeated 6-hour WX after WX forecast, many competitors continued ever further East.

Things were already looking good for bonk, when over the course of Tuesday, WXs started to suggest a route close along the shore.

Winds would be variable but mostly above 12kn, and knowing how much further North you had to get to round the corner at Recife wide and equi-distant to Newport, I went for it, as indeed did Kenza, peskasail and hmm, and closer to me, Mouthansar.

Unfortunately the time I had lost earlier proved costly when a bit of light wind blue goo started to expand in front of Mouth and I and a few others. Most routers are of little use in SOL’s blue goo (for wholly logical and therefore reliable reasons which I won’t go into here). So it was anybody’s guess, and I opted for action eastward, as did Mouthansar. A second mistake and sportingly I blamed Mouth, who replied “whadiddido?”, so to round of some more poetic banter in the Chat I hubristically wrote:

SOL friends are fun,
And you are a new one.
Now wait till the run,
And bonksky will be gone.
Gone wards the setting sun!

I stood bonk off a bit rounding Recife and Natal which gained a place or two. By now it was Monday afternoon, April 27 and 7-day gribs were routing almost as far as Bermuda, where, as always, the winds were forecast to be fickle. A great feature of QtVlm, which I and others in the European fleet route with, is that if you watch it working, you can see the isochrones fanning out and the route following the line of shortest-distance-to-goal extending, and the moments where it switches – sometimes radically – to another route entirely, if and when it encounters adverse weather. The further down the timeline this happens, the more you should be inclined to second guess its proposal to trade distance made good now for what ultimately should be returned with profit.

Qt was suggesting to aim for the windward coasts of the Leeward Isles, but was only deviating towards this off-rhumb more westerly course after four or five days of more-or-less direct routing. But clearly also, there was going to be blue goo to deal with before and after getting to Bermuda if you sailed direct, and if you kept West, there would be good breeze to the North and if necessary in the Caribbean. To make the dilemma pregnant, there was an immediate choice to be made: put in a gybe West or sail straight. I gybed, which got bonk into more wind and lost places, then gybed back in more breeze a few hours later and got most of the lost places back, sailing hotter.

Each WX I ran the router the advice to head for The Antilles was repeated, and generally, any distance downwind that I had deigned to sacrifice for more VMC to Newport, it was telling me to recover by sailing deep. And then what I had been hedging for those last couple of days transpired. Qt said go into the Caribbean and exit via the Mona Passage between Puerto Rico and The Dominican Republic. I was furthest West of everybody. I went for it. A few hours behind me, two boats – FastFlo and Aner59 – decided to follow and immediately closed the gap a bit by sailing deeper and straighter than bonk had offshore the Orinoco delta.

But it wasn’t plain sailing by any means and every hour we dropped places sailing fast but well off course. Lonely and into the 200s, I expressed the following words of doubt to Flo:

Ho and bravo, FastFlo!
It’s a long way round we go.
That last Wind X was harsh, no severe!
Perhaps NO A A now gives us more cheer;
If not, ‘twill be over to the spaghetti monster and the Orinoco.

… Enya now blends in as we kneel and pray

And every now and then, a new WX would once again suggest a course East of the Antilles, and so, as we approached Trinidad & Tobago there was still a chance that a windward passage of The Leewards would be quicker, and once more I hedged. This was a further mistake and my co-conspirators closed alarmingly by sailing through the strait between the two islands, when I had already committed to delaying a decision to gybe into the Caribbean till North of Tobago, which I duly did. Not smart, because, if in the end it had turned out that keeping out of the Caribbean was quicker, then half the fleet would have been ahead of poor old bonk anyway.

My lead on Aner and Flo was down to 15 minutes as our rankings finally started to climb, and climb and climb. It was looking good and for some reason the chat had turned to philosophy, inspiring me further …

Hi Aner and Flo.
Us three the dium-Po.
According to Hobbes
The biggest of nobs
‘sophical, so should know.

As we broad-reached on in perfect sailing breezes, our squadra piccola started to extend on the rest of the fleet further East of us in the Atlantic. Continuing to hold West would generate more BS and according to the routed WXs ultimately get us to Newport quicker. Putting in more northing on the other hand would generate more VMC immediately and would cover the fleet.

Aner stayed furthest West and Flo did the opposite. I stayed in the middle. Aner’s strategy was working best. I bore off about 0.9nm behind and below him and started to catch him back. A shift in direction and strength and I luffed up again to cross back still behind but now only 0.3nm and then went back into the lead. Another WX later though, to weather again became less favoured and the advantage was with Aner once more.

Meanwhile, Flo went for building his lead and set a course more directly for Newport, gaining up to an hour for a while on the cat and the mouse swapping tactical advantage WX after WX.

Ever since – no, well before – our 7-day WXs were routing all the way to Newport, it had been very clear that it was going to be a slow finish, and there were two options: either to approach more or less on a direct course from out at sea or to ghost up along the Long Island shore. For Aner and I, the Long Island option seemed to be a no-brainer.

Flo had fallen behind, but with a slender lead, Aner had the advantage. All he had to do was “stay awake and make no mistakes”! I e-mailed Winston did Aner in fact sleep much? Winston knows about these things. VERY VERY LEETLE was his advice! So, I’d have to try things, and I did and sometimes they nearly worked and sometimes quite the opposite. In the end, it was I who dosed off in the more critical moment, to throw away whatever purely theoretical chance I still had to pass him.

One thought on “Two Halves”