BA to Rio is neat short ocean race, and had been on my todo list for a long time. It is a bit too coastal for my tastes, so I only made my go decision very late.

The first part has the wind turning into our face which pushes the route into the coast. However the first waypoint (Punta) worked out as just after the 1030 wx, and the next time touching land just before the 1630 wx, that’s as convenient as it gets.

The next part is a long arc with the goal of being hard upwind (and ready to tack) exactly when I reach the shore. Here the worst case happens. The shore and a longish short tack sequence will happen in the dead of night. Just no. I’m about ready to throw the race and go in full damage control mode. Surprisingly I come out of it OK, less than a minute behind karriv. 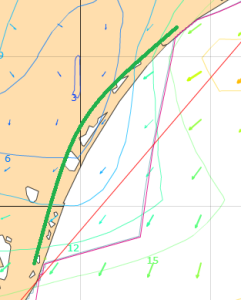 For the next section the coast is curved inward. The wind doesn’t shift much, so it’s a simple matter of aiming at the center of the curve – offshore. What a great use of daylight hours. I reach the coast for the last time around the late wx. (More Short tacks. See top picture.) Between tacking and plotting the best point for heading offshore for good I stay up till 2am. Oh well.

The offshore section to Rio is all uphill, with a number of tacks to play some minor windshift. I’m still behind karriv, the plan is to get some separation and hope that the weather gods make something happen. Most of the day is spent with a 1nm gap, probably not enough and the status quo is maintained. At the late wx my projected route changes. Skip the nightly tack and keep heading north. I trust the router and go to sleep.

To my surprise 16 of the top20 boats have disagreed. I find myself 10nm away from karriv, and more importantly we’re even against my target! Unfortunately he proceeds to do an ill timed tack, and loses VMG in heavy winds. When he corrects his mistake I’m clearly ahead, peskasail is a close third.

I now need to switch to cover mode. My first tack is way too late… cover fail, but no harm done. The next tack puts me right between karriv and peska. Perfect. Without any calamities I might win this.

And that’s where we are now. Two tacks left. I will not cover on the next one (5am outlaw time?) so if you guys want to attack there’s your chance.

2 thoughts on “Her name is Rio”