This is of course not likely to be the course any of us might actually sail because we’ll be racing in ‘real weather’, and not ‘most likely’.  However, even from this second race where I have compared the Pilot Charts course with the actual, there are some interesting observations to make.

I made a short video of a week’s variations of the winds across the course, but to be honest this snapshot shows what has been a pretty consistent pattern throughout the two weeks of racing.  So I won’t post the video, just this snapshot. 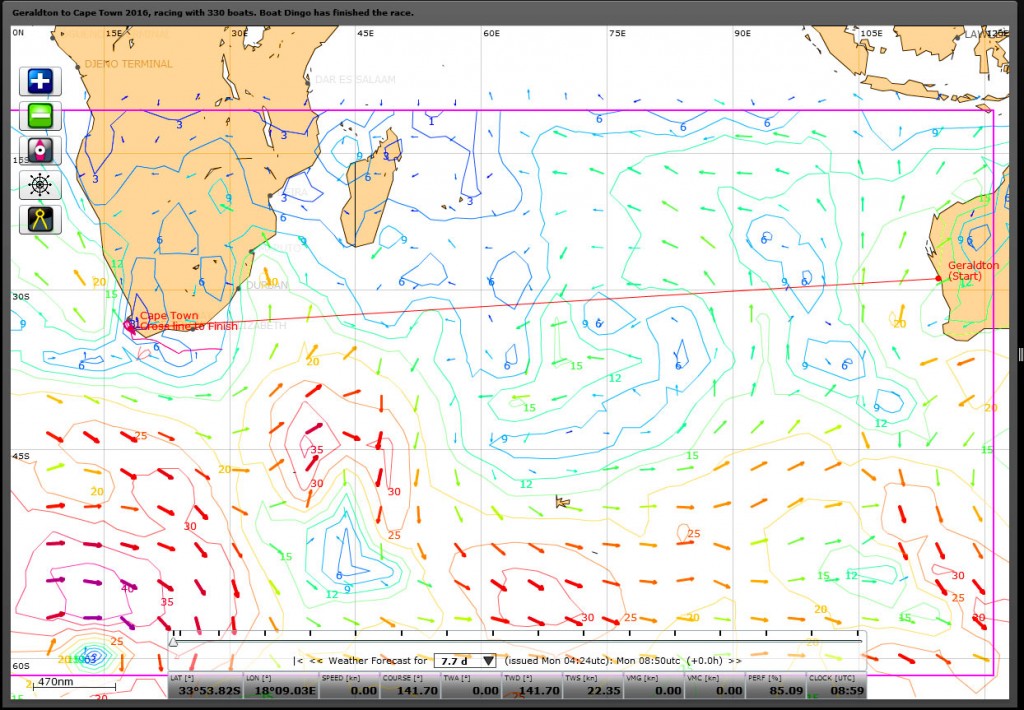 What is interesting is that in this race, the course was both roughly parallel to the latitude lines and at 180 degrees to the west-east movement of the weather systems.  This doesn’t happen too often as usually we race ocean races with at least a roughly equal north-south east-west displacement, travelling either up or down through a considerable change in latitude, and often across the equator.

What we had in this race was actually a race through a characteristically similar weather system.  The diagram shows it clearly.  In all likelihood, the boats in this race would be travelling through and around very inconsistent medium to light winds (blue green) well north of the stronger and more consistent ‘roaring forties’ (orange red).  Indeed, the race was based on trying to find favourable (in direction ) winds of a medium strength all the while trying to avoid the regular and repeating pattern of high pressure/low wind speed holes.

In normal races with a good change of latitude, one traverses the doldrums of course but most of the time one is trying to pick up a good ride on the trade winds.  Here, that wasn’t the case; the trade winds lie in different latitudes from those we were sailing. 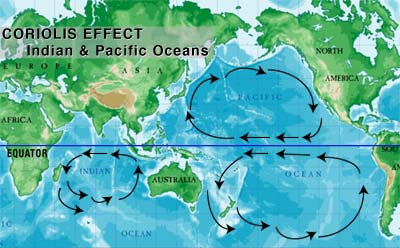 As a result, the Pilot Chart course is not much assistance for this sort of race.  It is more likely to come into its own where courses involve the trade winds (ie. winds which are typically more reliable) so that the Pilot Charts ‘most likely’ predictions have a much more reasonable chance of being right.

Instead, what we had here was a race which required sailing absolutely to the actual weather conditions, WX by WX, so that one could successfully negotiate the intricate pattern of medium and low wind systems.  And I guess, also fairly predictably, the best the Pilot Chart routing could predict was to head west not too far from the rhumb line, because its ‘most likely’ wind strength and directions roses are, in this part of the Indian Ocean, nothing much more than the average of highly variable and inconsistent wind patterns.

So I learnt something out of that that I was not particularly attuned to in previous races. Or shall I say, this analysis has reinforced to me the need to pay particular attention to the latitudinal variation expected in any ocean race.  If we are going to be sailing roughly east west or vice versa, at any latitude, then be aware of the fact the whole race will likely be in a similar weather pattern.  And further, pay attention to the trade winds, because that pattern might be a strongly consistent one, if the course is along one of the major east-west (or west-east) trade wind systems.  And conversely, it might be a highly inconsistent pattern if the latitude is not affected by trade wind systems.

As a last observation, I guess the fact that we were sailing into the approaching weather patterns (going east to west) meant that those light wind sections at least passed over us pretty quickly.  This seems far preferable to travelling in an easterly direction along with them, where one can get stuck for days, or at right angles to them where again, it is easy to get stuck as one wind hole can quickly be replaced by another before one can break south or north of the pattern.

So here’s the Pilot Chart predicted course again, and here’s the course I sailed, along with Outlaw who, but for an unfortunate bbq within hours of the line, should have won the race!